Late capitalism, the society that we inhabit in the privileged West, is a society rife with repetition. Since the Enlightenment, specialisation. has come to be seen as a good in itself. The Jack of all trades, is a master of none. In its imperative dominance of nature, this society has privileged repetition above all else as a way towards perfection.

Art is no different. In Gauguin: Voyage to Tahiti we see the artist as obsessive compulsive. Gauguin is concerned with two things, to be sure, but both to the same purpose. Firstly he is obsessed with painting and secondly with finding the truly pure existence along side his idol, the noble savage of the French colony of Polynesian Tahiti. He has no insight into his drivenness towards the heavily familial tribe that accepts him as a curiosity, or of the fact that this tribe is colonised bye his culture; that of France and the Western European project of modernity.

He finds comfort in the primitive and he is promised a wife and they take to each other, a provision put on the pairing by the tribal elders and the girls family. Really, this is glorified paedophilia but we'll forgive the French for the time being of being blindsided by this crime which they hardly see as a crime at all. Anyway, all the ageing Paul really likes doing with his under age bride is to paint her and to bully her into poses that he feels are truly representative of his notion of the truly noble savage.

Of course, Temura (Pahura), his bride betrothed in bigotry is flattered initially by these fussing of an older man, and Gauguin conveniently forgets his wife and children that he has left behind in Paris. No sin is too great for this obsessive compulsive idol of the Catholic bourgeoisies around the Western world. He is portrayed with great affection and I feel that the filmmakers themselves had little insight into the life of this all too familiar criminal of Catholic disposition.

He is so stupid, that while obsessed with his new wife's noble savagery, he fails to realise that she is all too human. After some time, she grows bored with her role as a muse to this ageing cretinous hero of the West, that she takes off with a younger man and fellow Tahitian. Gauguin very nearly murders her and her lover, but being a gentleman of the noblest order, refrains from shedding blood at the last moment, in the end freeing Pahura from the clutches of their marriage and leaving her to live life as a Tahitian and a human being, ie, with someone who treats her with physical intimacy, not just idealised affection.

This is such an accurate portrayal of the Western mindset that it struck me of being worthy of further intellectual investigation. Isn't this the archetype of the modern man? The specialised and obsessed man who pursues his profession at any cost? The same one-dimensionality that women in general laugh and snigger at behind their man's back, and tolerate so long as he continues to bring home the bacon?

That is sadly one thing that the poor struggling artist Gauguin fails to achieve in his life time. His paintings just never sold while he was alive. I must admit that I found this apart of the story surprising seeing as I share along with most people an attraction to his paintings.

That is, until I saw this film. The veil of the tears that art seeks to hide from us all being lifted when I saw the depravity of this artists perverse and immoral life. Yet, he is held up as a hero by art lovers and academics world wide. I feel compelled to ask, why is this monster held in such high esteem?

I think this is because he captures in his paintings the depravity of his humanity. The suffering of his second nobly savage wife, as well as that of his abandoned wife and children left behind in Europe. The suffering of these innocent bystanders to his perversity is somehow captured in the obsessive compulsive desire to portray the noble savage as the true inheritor of the Christian motif.

All of the history of the development of the modern world has been exactly this same drive: an obsessive compulsive drive to dominate nature, oneself and the other through an ever increasing specialisation of tasks and behaviours in the desire to dominate über alles. To achieve a god-like status as an unbridled male creator through the denial and control of everything considered feminine.

The western artist is glorified because they represent the epitome of this archetypal obsessive compulsive male God, obsessed what Kant correctly identified as a purposeful purposelessness, or as Gauguin would have liked to put it art pour l'art.

So it is that during the height of the modernist movement, art became against itself. It became what Walter Benjamin called non-auratic or with an aura. This is the art of Picasso, Beckett and Duchamp. Art progressively became a caricature of itself and what totalitarians like Hitler and Stalin decried as decadent, ie, representative of the society that gave rise top its creation. It can be considered a proto-punk movement and against art per se.

The Absurdity of Existence

Much of the impetus for these movements and their successors comes from outside of art. First the fin de siècle followed up by the sheer tragic folly of the First World War, or the beginning of the European Revolution as Eric Hobsbawm prefers to call it. Whatever you call it, it was a war with no clear instigator and no clear victor, though France and Britain joined forces supported by their new found friend the US of A, against their old whipping boy, Germany. They convinced Germany that they had lost and under the vindictiveness of the French, foist upon the Germans defeat and war reparations equivalent to what the Prussians forced upon the French post the 1871 debacle.

The end of the nineteenth century convinced many that the Western world as they knew it was about to self-employed and it very nearly did. In October 1917, the defeated Russians returning to their homeland were easy pickings for revolutionaries who were ready to seize their opportunity to take control of a kingdom left in the grips of a power vacuum. No one except for the Bolsheviks had an answer to the nineteenth century question: What is to be done?

The same fate seemed possible in all of the countries involved in this debacle. The Irish seceded from Great Britain and to the horror of the English became a Republic. The Wobblies were on the move in the US of A, and Labor Parties across the British Commonwealth were becoming more vocal in their opposition to the lunacy that was the First World War. Returned servicemen wanted a greater say in the running of the Republic and the arts, closely associated with the ruling class and seen by many as corrupt and debauched. Artists started to mock art, to paint dismembered bodies, write music that was discordant, and to insist that a toilet urinal was a valid piece of art.

The sublime had become ridiculous in the inter-War period and much fun was made of the bourgeoise art's pomposity and pretension. And then, with the end of the European revolution or World War II, suddenly the world was left speechless when a society that everyone thought at least had a modicum of civility became notably barbarous and murdered a great number of jewish and other people that they saw as the creators of this decadence. No one believed Hitler when he declared that he would rid Europe of Jewry but he was a politician who kept this promise at least.

The maniacs who controlled the Third Reich very nearly succeeded in their extermination drive. They wanted to rid Europe of the decadence of the arts and so burned many books. But to paraphrase the German poet Heinrich Heine as he pointed out in a poem in the previous century; first they burn books, and then they burn people.

Yes, existence was absurd. God was increasingly associated with the warmongers and bourgeois piety. Humans were left all alone and the world life did in many ways seem to be meaningless and without any greater purpose.

Out of the rubble of Europe Theodor Adorno announced that art was no longer possible.

The question remains: was Adorno right or not? 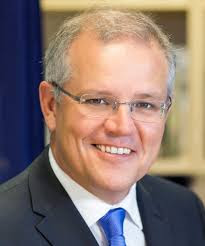 We should know better. Well, you'd think we would wouldn't you. The barely honourable prime minister ScoMo out on the hustings and there isn't even an election in sight. Our fearless pentecaustic would rather exhort us to prayer than to admit he and his government are wrong about Climate Change and to come up with some worthwhile plan to deal with the catastrophe that has begun to unfold. Instead, he'd rather mouth platitudes about the fearless fire-fighters and how they are doing such a Stirling job dealing with the mess. I don't doubt that these poor bastards are indeed fearless, but I'm sure that they, too, would rather that they didn't have to risk their life and limb to make ScoMo and his fellow imbeciles look good. Prime minister ScoMo If we had an opposition in this country it might be a different matter. After much thumb twiddling and a limited amount of introspection, the leader of the opposition, Anthony Albanese declared that the Austr
Read more

December 24, 2019
In a way it's great to have a post that no one reads. I mean, I can write whatever I like and no one will ever know. Or will they? I suppose one day, someone, somewhere will stumble across what I have written and published and glean something from what I have taken the time to put down on my pixellated screen. Well, here's to that day. So now, for what it's worth, I have cleared the political flotsam and jetsam and left a path towards developing an aesthetic. Many people in Australia poo-poo the very idea of having an aesthetic, or a discussion on the matter in any case. It reminds me a bit of a quote by Bertrand Russell from memory, to the effect that a person with no philosophy is over a hundred years out of date. I think it's fair to say that much Australian art suffers because of this prevalent anti-intellectualism. A cursory trip around Melbourne's galleries for instance, will reveal a surfeit  of  what appears to be superlative works. And in a way they a
Read more